Ugh. Where to begin with Koh Phi Phi? Maybe 20 years ago: a curious man from Finland arrives on Phi Phi Don with his friend, finding just one restaurant that doubles up as a bar. He stays in a tree house, high up in a huge tree, with ants making trails across his room and only a candle for light after sunset. During the day, he swims naked on the beach because there is absolutely no one around to be offended by the sight of his bare flesh.

Our new year’s eve arrival at this National Park site was somewhat different. We hopped off a long-tail from one of the most calm, peaceful and beautiful Thai islands (which will not be named in relation to Phi Phi for safety reasons) and joined a crowd of a thousand tourists, all desperate to consume, to flog this dead community some more, to take selfies with their buckets of SangSom and their new ill judged tattoos.

Once you become part of this sweaty, braying mob, there is little you can do to escape it. The restaurants, bars and shops are so crammed in that finding a quiet spot is a futile quest. Even hiding out in our shabby, bed bug infested bungalow offered no relief because we could still hear the tourist torrent rushing past.

One option is to head to the beach, but this is not so easy on this tiny island. Ton Sai beach is lined with longtails and serves mostly as a ferry port, so swimming from its golden sands is pretty perilous. On the other side of the thin strip of human habitation, there’s Lo Dallam beach. Aside from the name sounding like one of those floodlit sports shops from the 90’s, this beach serves as the main party scene and is therefore awful. During the day you’ll find some peace here, but the sand is full of glass from the night before, making swimming and a stroll on the sand too dangerous. By early evening, the various bars pumping out house music, and only house music because apparently there are no other genres of music suitable for parties, make this an awful place to watch the light fade over the beautiful limestone cliffs that frame the island. By night, the party goers eschew the pay-to-pee toilets and use the sea instead, so think twice before taking a midnight amble along the shore. 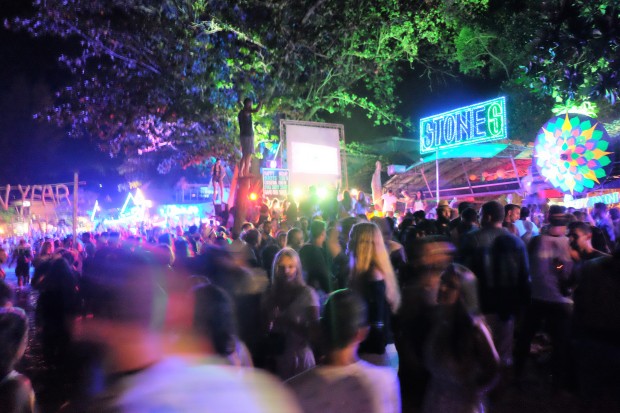 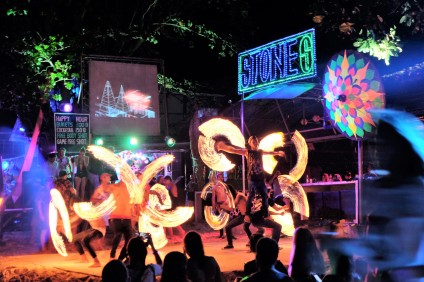 We took a lengthy walk over to long beach and found this to be a reasonably nice spot to spend the afternoon. It’s still over crowded but this is a different crowd. Think well groomed Scandinavian families on holiday instead of lads in vests from Manchester on the pull, and you get the idea. Even so, there are far too many long-tails lining the shore and not enough shady spots. By Thai standards, it is not a great beach.

We recommend hiking up to the various viewpoints from Long Beach, rather than from Ton Sai. You’ll avoid walking up hundreds of steps, teeming with hungover tourists, taking a free gentle hike up to the island’s ridge instead. On this mostly solitary amble, you’ll pass surprisingly friendly locals living in Tsunami Village, hastily erected after the 2004 disaster that struck the island, and become immersed in the lush rainforest that covers the highland. The actual viewpoints themselves are disappointing, offering views of an island that has been utterly destroyed by tourism, from spots that are themselves packed with lager swilling, selfie snapping tourists, but the hike was a high point for us.

From the viewpoints, it’s obvious that Phi Phi has grown far too fast for its own good. Although much of the island’s infrastructure was destroyed by the tsunami, the money that flooded in its wake has evidently been used to build massive new hotels and resorts, alongside row upon row of bars, restaurants and tourist tat shops, instead of proper sewage facilities and safely habitable spaces. Whilst the central garden, irrigated purely by sewage runoff, is a step in the direction of sustainability, it stinks and we saw no one, apart from ourselves, wandering through it. More must be done to solve the sanitation crisis that everyone is just turning their noses from.

The result of all of this is an artificial town that smells worse than anywhere we’ve visited, and a constant risk of death by fire or cholera. If one of the shops were to catch fire, this would quickly spread throughout the whole town. We have no idea how the hordes of visitors, most of them drunk, would find their way to safety in the panic of the crowd. You’re probably not meant to think about this and just drink more cheap rum, but the reality of the situation is fairly alarming. 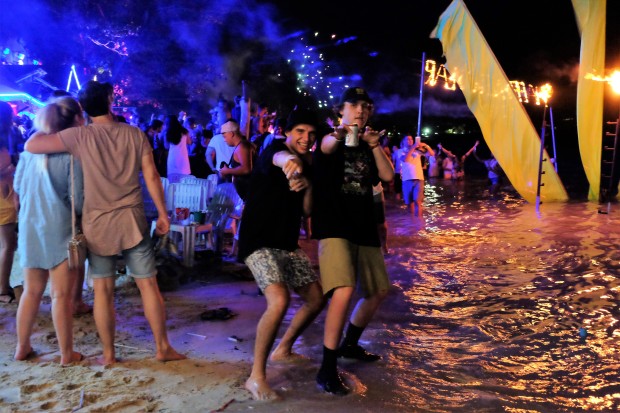 It may be that the whole point of Phi Phi is to put yourself in danger and even in pain before you leave. We’re not just talking about hitting the jaeger bombs and battling a hangover later. Nope, we’re referring to Reggae Bar, a pub that boasts a full size muay Thai ring at its centre so that drunk tourists (mostly Brits, of course) can fight each other for a free bucket of booze. Fighting without any proper training is stupid and dangerous, but doing it drunk is really stupid and really dangerous. We saw 4 fights in the bleak half hour that we were in the bar, and while the bloodthirsty audience had a great time, we left feeling depressed, especially as they didn’t even play any reggae there.

Sadly, the constant throb of greedy tourists has drained the island’s soul, creating an atmosphere of contempt from shopkeepers, hoteliers and restaurant staff. The massively inflated prices of everything, from food to accommodation, also suggest that the visitors are only tolerated because of their economic benefit. We felt unwelcome everywhere we went in town, and it’s easy to understand why when really we’re not any different from any one else visiting the island. 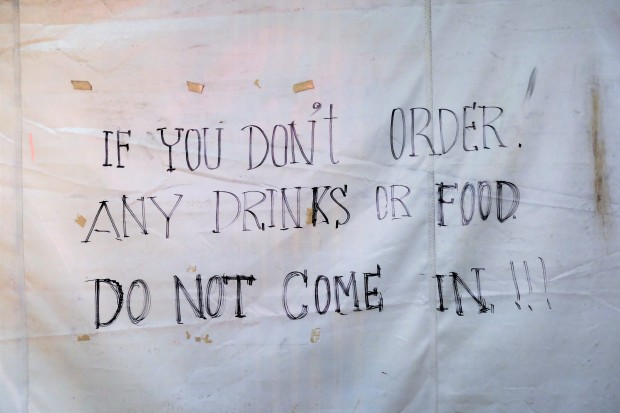 Spending new year’s eve on Phi Phi was not one of our better ideas, in fact it may have be our worst decision on this trip. It made us question the reasons that we chose to travel in the first place, and whether this is such an honourable thing to be doing when the environmental consequences can be so obscene. These are questions we still haven’t answered, but we’re taking a much more measured approach to our journeying from now on. If it wasn’t for our excellent diving trip with Blue View Divers to Phi Phi Lae on our third day, we’d have nothing good to say about the whole trip. But swimming through an underwater cavern teeming with fish just about made up for the horrors we’d witnessed on the shore. When we inevitably return to Thailand, just like our friend from Finland, we will certainly not be heading back to Koh Phi Phi. 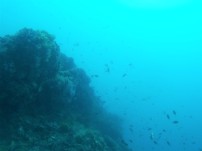