The weary traveller is often presented with a choice on the road – whether to take the easy route, which may not be as rewarding, or take the tougher option which will most likely be more exciting, more interesting, more real. Mount Kyaiktiyo, situated in the South East of Myanmar, is a perfect example of this dilemma.

One of Myanmar’s most sacred Buddhist sights, travellers, tourists and pilgrims visit the mountain to bear witness to the giant golden rock that has balanced, seemingly impossibly, on the very edge of another rock for centuries. The secret to its astounding clinginess, in spite of numerous earthquakes that have rumbled this mountainous region, is that it is glued to the rock with a few strands of Buddha’s hair. Whether or not you believe in this holy adhesive, the gold leaf covered boulder steadfastly defying the laws of physics is a sight to behold.

So, should you pay a few thousand kyats and take a crammed pick up straight to the summit from Kinpun (the welcoming base camp where wise visitors stay the night before ascending), or join the holy wanderers and hike the steep and dusty pilgrim’s path?

We decided to join the pilgrims on their path, and our 5 hour climb up the mountain was one of the highlights of our zippy trip around Myanmar. We set off just before 8am, an unexpected chill still lingering in the highland air, stocked up with 100 Plus (a miraculous Malaysian isotonic drink), dried mango and big sticks of sugared coconut for energy. Walking along the main road of Kinpun, which becomes the path up the mountain, we did our best to avoid the hustle and bustle of the market stalls, the coach parties and baffled tour groups. But no sooner than we’d walked 100 paces out of town, the atmosphere changed completely and we were greeted with the stillness of the morning, the only sounds a whistling kettle, a hungry cat, a cheering cockerel.

As the mountain path began, we felt confident that we could reach the summit without too much hardship. The weather was cool, the path mostly shaded by tropical foliage and bamboo shacks, whose entrepreneurial owners also offer drinks and snacks, and it wasn’t too steep. For the first couple of hours, we had a hoot meeting the locals, mostly descending the mountain, posing for group selfies and pretending that we knew about the premier league. We lost count of how many selfies we were asked to pose for, but it’s safe to say that many Facebook feeds of Myanmar featured our sweaty mugs that day. 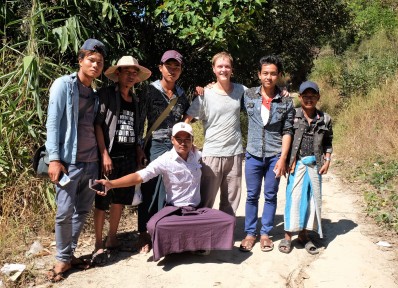 Everyone, without exception, that we met along the path was welcoming and friendly. Tea shop owners would insist that we take tea with them, free of charge, just to have a chat with us. Joking families on pilgrimage would tell us we’d taken the wrong path, that the pick ups were back down the mountain, so rare is it to see a foreigner on the trail. 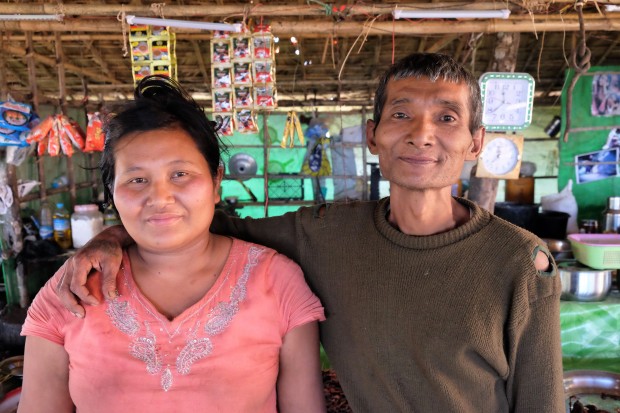 By midday, our legs were growing achy and the heat was picking up. Whilst most of the trail had been shaded so far, the shacks began to be further and further apart. We found ourselves climbing steep, thigh-busting steps in the full glare of the sun, crunching up dusty trails in the searing heat. By this point, we’d grown weary of the selfies, our smiles more strained with each new request. We couldn’t take any more tea due to the lack of toilet facilities. Nick had run out of betel nut to chew. Things were getting tough. 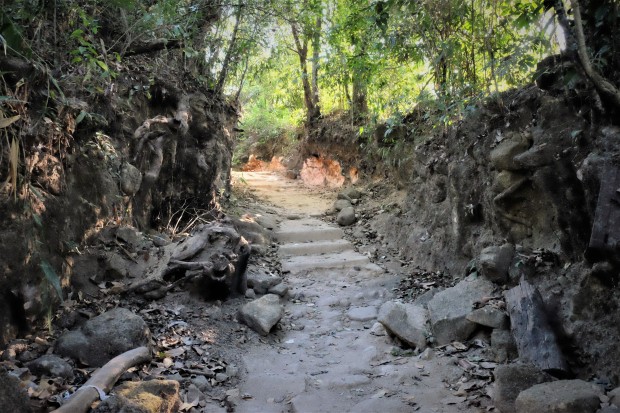 The 7 and a half mile path felt interminable. It grew increasingly steeper, winding around the mountain so that often we were walking away from our destination. But we kept on, and eventually reached the sacred summit.

What a shock it was for us, having seen no other tourists on the path, to be met by a crowd of thousands of people, some local, some just wealthy foreigners on a coach trip from Yangon for the day, swarming around the holy site. There were restaurants, hotels, tourist tat stands, some of them even within the ‘sacred’ area where you have to take off your shoes to enter. There was a feeling of a crowded beach to the place, with families camped out in makeshift tents to avoid the midday sun and confused tourists trying to work out what they should be photographing. 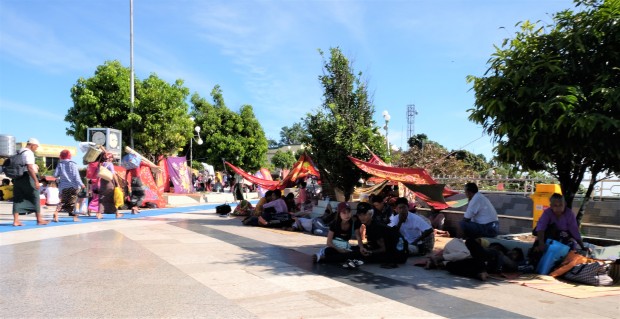 We were even more shocked when, dripping with sweat, caked in dust and filled with relief at having finally made it to the top, we were stopped in our tracks by an official and asked to pay a foreigner entry fee of 6000 Kyats each. “But…” we tried to argue, “we’ve just hiked all the way up the mountain. It took us all day. These people have just come up in a pick up!” Indifferent to our argument, or perhaps not fluent in any English other than,  “Foreigner must pay entry fee. 6000 Kyats,” we had no real choice other than to cough up the cash.

It must be said that this supposedly spiritual space left us feeling baffled, even a little bit disappointed. Yet, stumbling across rowdy monks taking a cooling dip in a damned stream, insisting that a 60 year old man’s English is pretty good considering he lives halfway up a mountain, stopping to take in the view of the mountain ranges stretching out to the horizon in a low hanging mist, these are the rewards of the hard path. If you visit Kyaiktiyo, do take the pilgrim’s path, don’t take a pick up. We assure you that in this case, the journey is the destination.

Note: Whilst we strongly recommend not taking a pick up to the summit, we don’t advise hiking down in the dying light of the day. Instead, take a pick up back to Kinpun with the locals just before sunset and brace yourself for a terrifyingly thrilling 30 minute ride down the twisting mountain road at an absolutely ridiculous speed, partly in the reassuring orangey glow of sunset, partly in the dark. Once the adrenaline wears off, you can get a reasonably priced meal at the top notch Sea Sar Restaurant and then head to bed for a well earned rest.

One thought on “The Journey to Kyaiktiyo – Why Drive Up the Mountain When You Can Walk?”